In a day like today May 5th Mission Impossible was presented to the world, nearly two months from now on July 27, will be released the latest film titled Mission: Impossible – Fallout.

The good news is you got plenty time to catch up with the previous versions or just simple enjoyed again, Netflix has all the fifth movies, Mission impossible is based on a television series from the 70s, it is an action spy film. (IMF) Impossible Missions Force tells the adventures of international agent Ethan Hunt by starring Tom Cruise, who usually receive not just a complicated work, he gets what no one can’t achieve a Mission Impossible. Here I had summarised a synopsis of the previous movies plus their trailer to keep you in a good mood to enjoy the new upcoming version MI Fallout. In my opinion, every single movie is so much fun to watch will keep you engaging from the beginning; you will feel part of this intrigue investigation, that will bring you around of the globe visiting many countries, adventures with unexpected fate. A legendary saga that I recommend watching in the comfort of your home by Netflix. 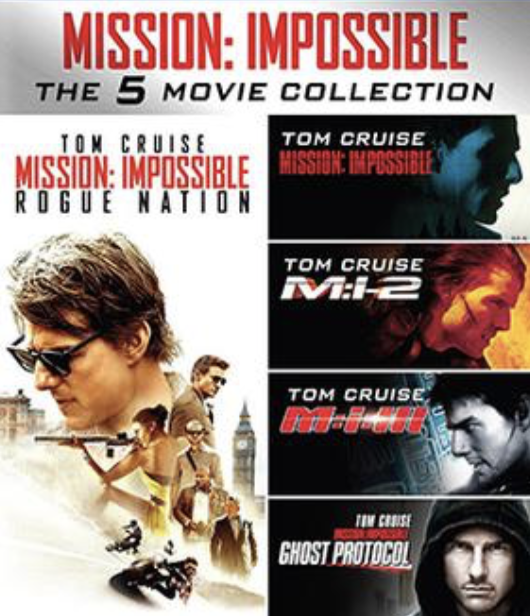 Ethan Hunt is framed for the murder of his fellow IMF agents during a Prague Embassy mission gone wrong and falsely accused of selling government secrets to a mysterious international criminal known only as “Max”. The action spy film was directed by Brian De Palma, and was produced by and starred Tom Cruise. Work on the script had begun early with filmmaker Sydney Pollack on board, before De Palma, Steven Zaillian, David Koepp, and Robert Towne were brought in. Mission: Impossible went into pre-production without a shooting script. De Palma came up with some action sequences, but Koepp and Towne were dissatisfied with the story that led up to those events. U2 band members Larry Mullen, Jr. and Adam Clayton produced an electronic dance version of the original theme song. The song went into top ten of music charts around the world, and was nominated for the Grammy Award for Best Pop Instrumental Performance. The film was the third-highest-grossing of the year and received positive reviews from film critics.

Ethan, retired from being an IMF team leader and engaged to be married, assembles a team to face the elusive arms and information broker Owen Davian (Philip Seymour Hoffman) who intends to sell a mysterious dangerous object known as “The Rabbit’s Foot”. The film was directed by J.J. Abrams.

Ethan and the entire IMF are blamed for the bombing of the Kremlin while investigating an individual known only as “Cobalt” (Michael Nyqvist). He and three other agents are left to stop him from starting a global nuclear war. The film was directed by Brad Bird.

Ethan Hunt comes under threat from the Syndicate, a near-mythical organization of rogue agents who kill to order. Faced with the IMF’s disbandment, Hunt assembles his team for their mission to prove the Syndicate’s existence and bring the organization down by any means necessary. The film was directed by Christopher McQuarrie.

When an IMF mission ends badly, the world is faced with dire consequences. As Ethan Hunt takes it upon himself to fulfill his original briefing, the CIA begins to question his loyalty and his motives. Hunt finds himself in a race against time, hunted by assassins and former allies while trying to prevent a global catastrophe. The film has been directed by Christopher McQuarrie.

iThere are no comments

Begin typing your search above and press return to search. Press Esc to cancel.